„… the most luxuriant and the most extravagantly beautiful of al the alpine gardens I ever beheld in all my mountain-top wanderings.“

Paradise Park afoot of Mount Rainier welcomes you with this cheesy quote from John Muir (1889). Even though it sounds a bit exaggerated, there lies a truth within.

While having two days off from work I managed to visit Mount Rainier National Park. Driving through the Gifford Pinchot National Forest from south to north after one of my shifts was tremendously beautiful itself since autumn strikes the North West with all it’s force and creates patterns of yellow and red throughout the land.

Arriving at the south border of the National Park in late afternoon I decided to put up my tent at Ohanapecosh Campground close to the Stevens Canyon Entrance. Dark came quickly after a quick stroll in the near Grove of the Patriarchs and a small camping dinner.

Temperatures fell down to 5°C and made me stand up pretty early in the morning. I entered the gates of the park way before 7:00 am, thus avoiding the exaggerated entrance fee of 25$ (I don’t want to buy the whole park, I am here all by myself with no one to share the entrance fee, leaving nothing but footprints and paying for the campgrounds already!). 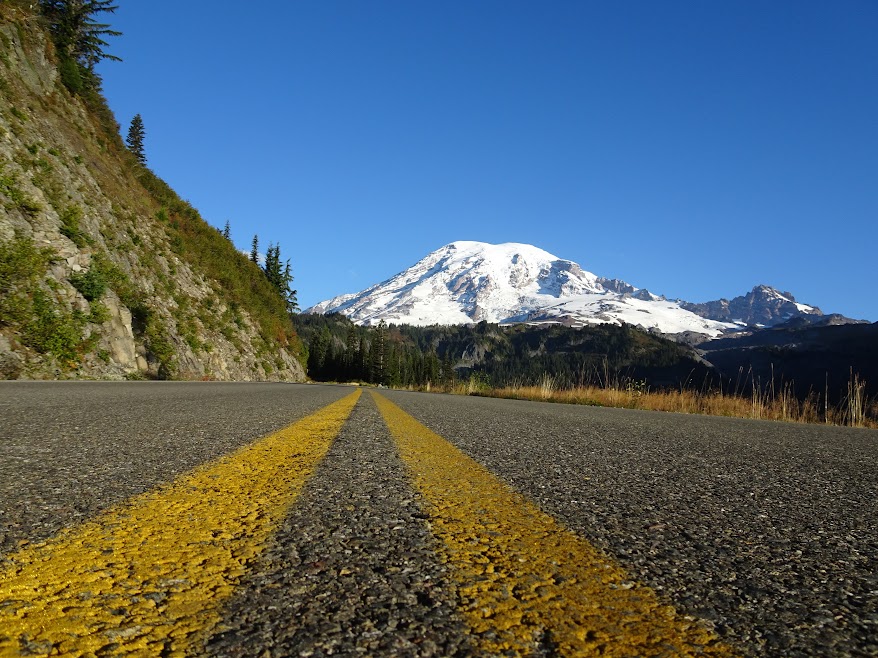 I quickly explored the Box Canyon and stopped at the Reflection Lakes for some pictures. The temperatures are below freezing up here during nighttime is what I realized. Winter is coming! 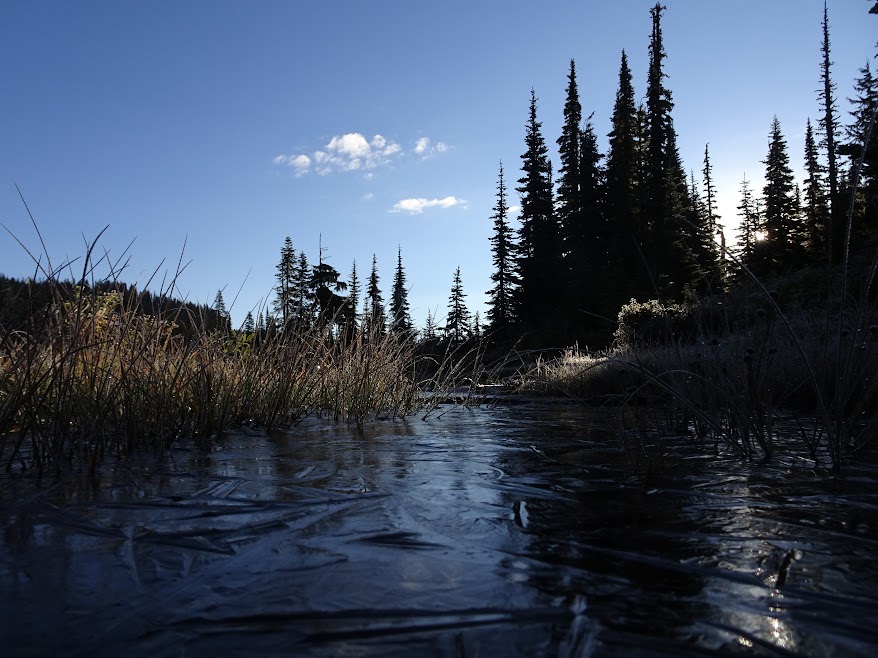 Ice on Reflection Lakes, a sign for freezing temperatures I guess?! 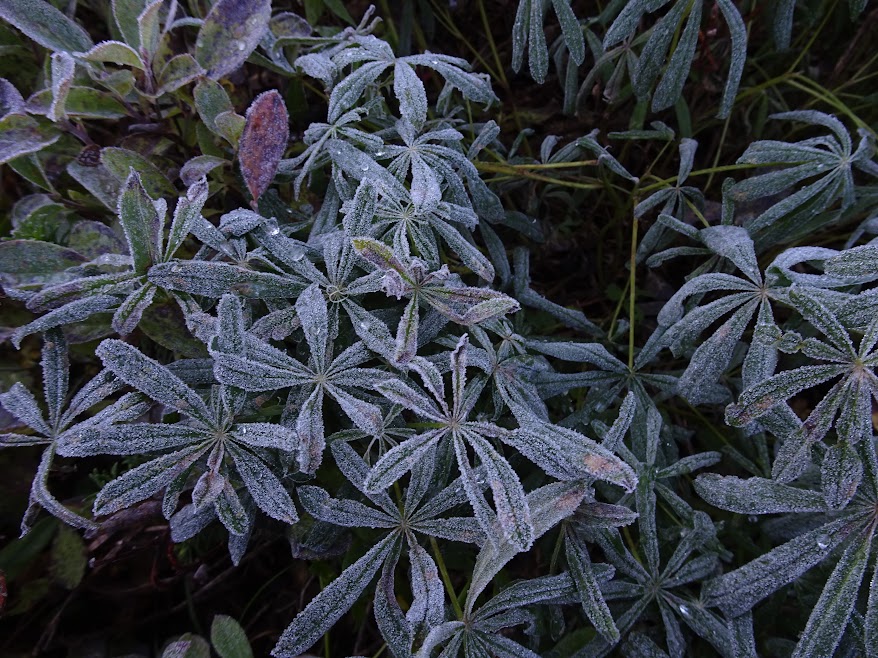 It’s cold up there 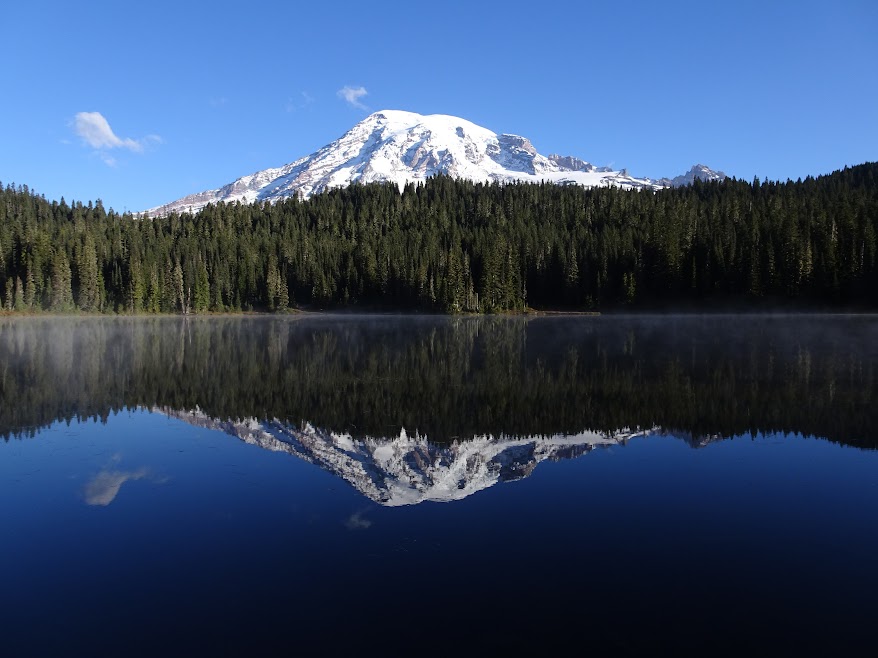 Soon I entered „Paradise“. The alpine meadows which inspired John Muir (1889) to toss around with pompous words and superlatives. 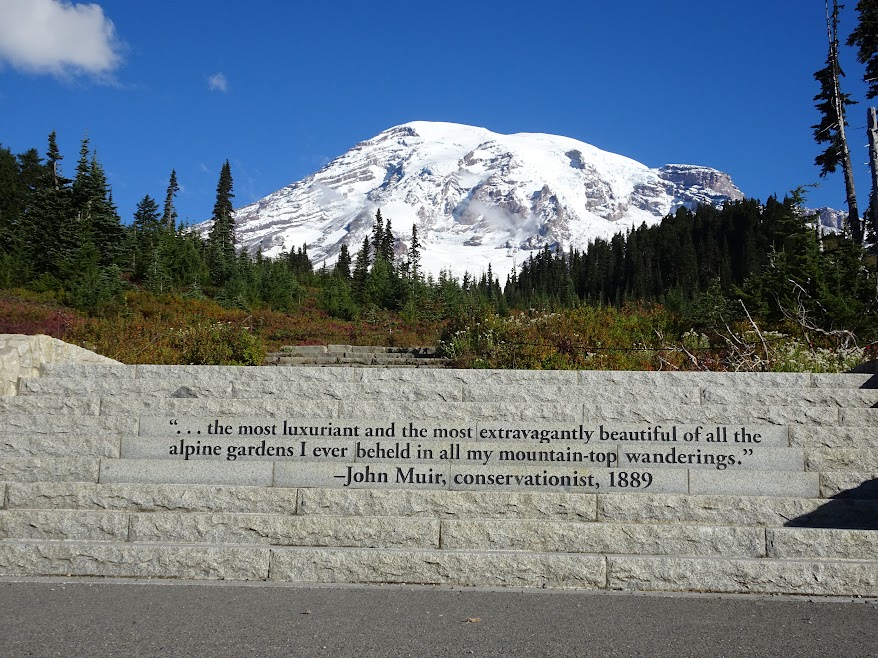 John Muir welcomes you to the „Paradise“. Or at least a quote does…

My plan for today was to hike up to Camp Muir, following the footsteps of David, my ancestor who did this hike a week ago. Camp Muir is the highest accessible point on Mount Rainier if you don’t have a climbing permit. It lies above 3100m and serves brave climbers as a basecamp. For not so brave dayhikers it offers breathtaking views of glaciers and the land which lays beyond.

A ton of warning signs make you shiver. Don’t hike up to Camp Muir! It’s dangerous! Even experienced climbers have died in the Muir Snowfield! Whiteouts strike you just in minutes!

To be honest, those words didn’t leave me untouched. Starting at around 10:00 am I realized that clouds formed on top of the mountain, knowing that the wheater won’t change to the good I wasn’t sure if I should take my chance. I decided to go up as high as I can get without taking too much risks and turning around in case the view gets too bad. 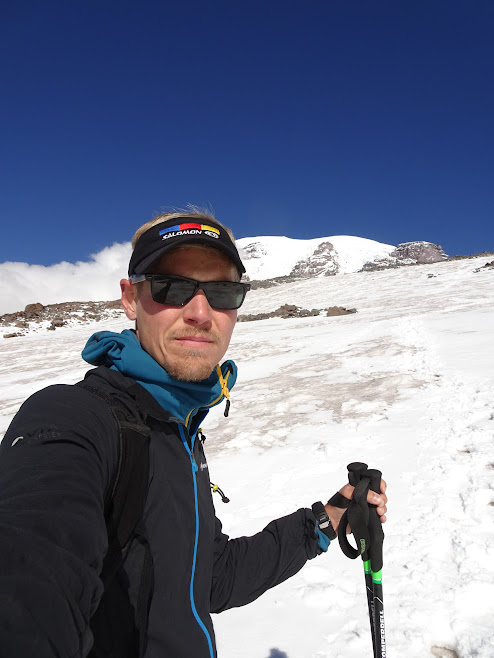 After about 600m of elevation gain I reached the end of the maintained trail, from now it was another 900m up the Muir Snowfield. Some tiny black dots up in the snowfield made me cheer: „I am not alone up here!“ I pushed and kept pushing. 500m below Camp Muir I reached the tiny little dots, three alpinists who climbed Mount Rainier in the past on a day hike up to the Camp. We spoke some words and I left rushing to the top. 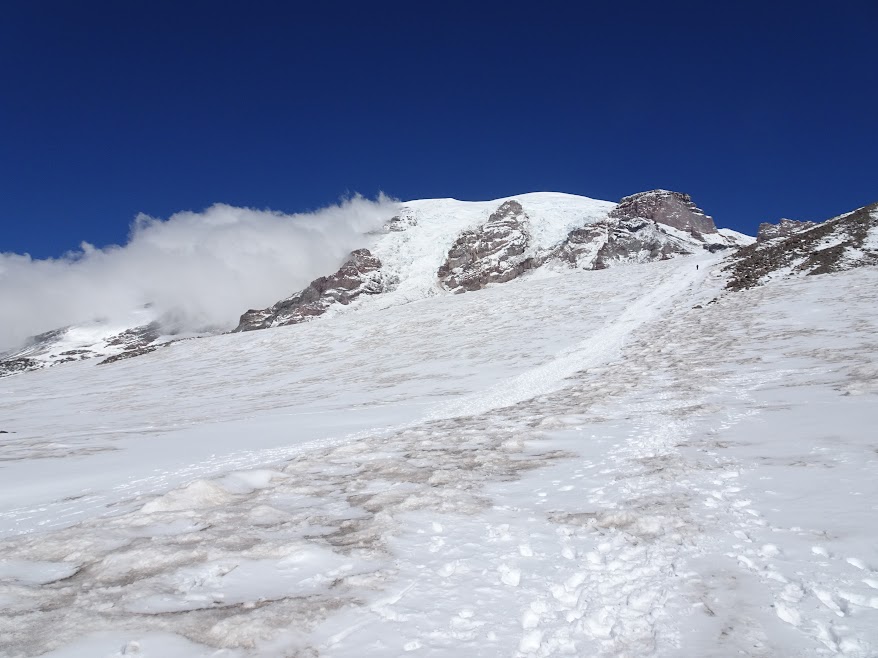 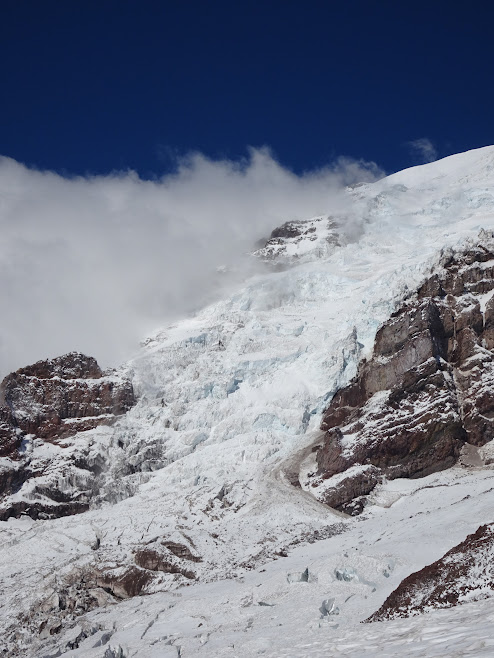 At 12:30 pm I reached Camp Muir. I guess the Himalayan must have a similar flair but just more gigantic. I took some quick pictures and ate a sandwich. A couple of birds attacked me, wanting me to share my lunch. „What the fuck are you little birdies doing up here above 3000m?! Go down to Paradise and grab some worms!“ They weren’t even afraid of trekking poles. 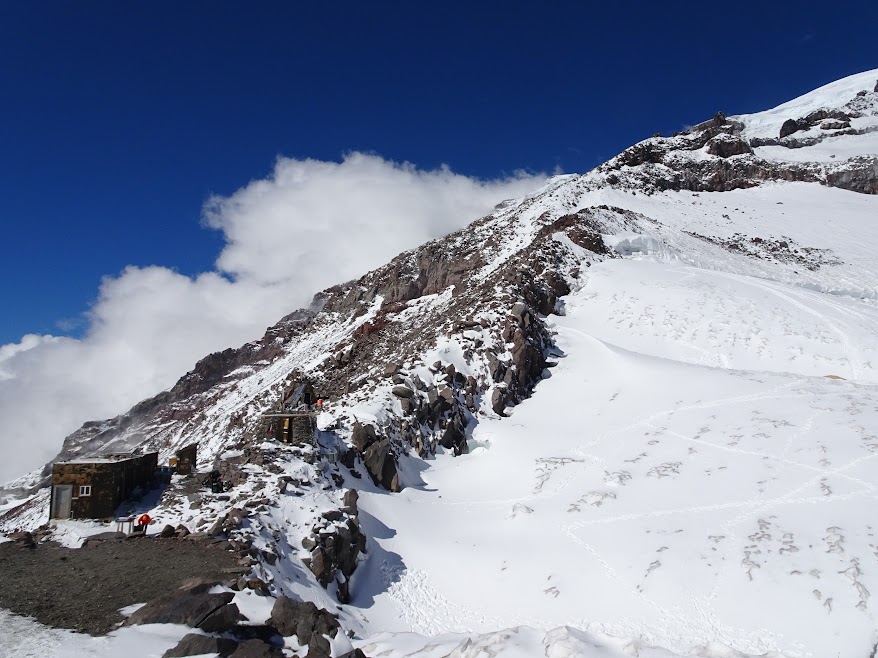 But not the birds made me rush, the clouds did. Within five minutes massive clouds formed and made me think about all the warning signs down there. „Within 5 minutes this an happen to you! (Imagine a picture of a hiker in a complete whiteout next to the text!)“. 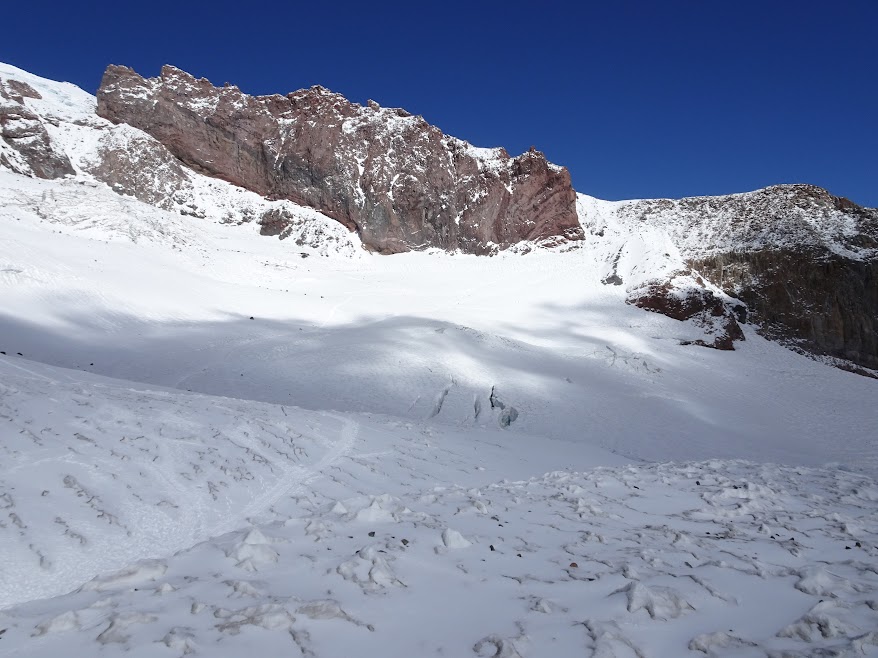 You can’t go any further without a climbing permit

„Is this goin‘ to happen to me?! Sure not!“ Pack your pack and run Forrest! And there I went… leaving the clouds behind. Ok, ok some white spots hit me but I was fine after all. 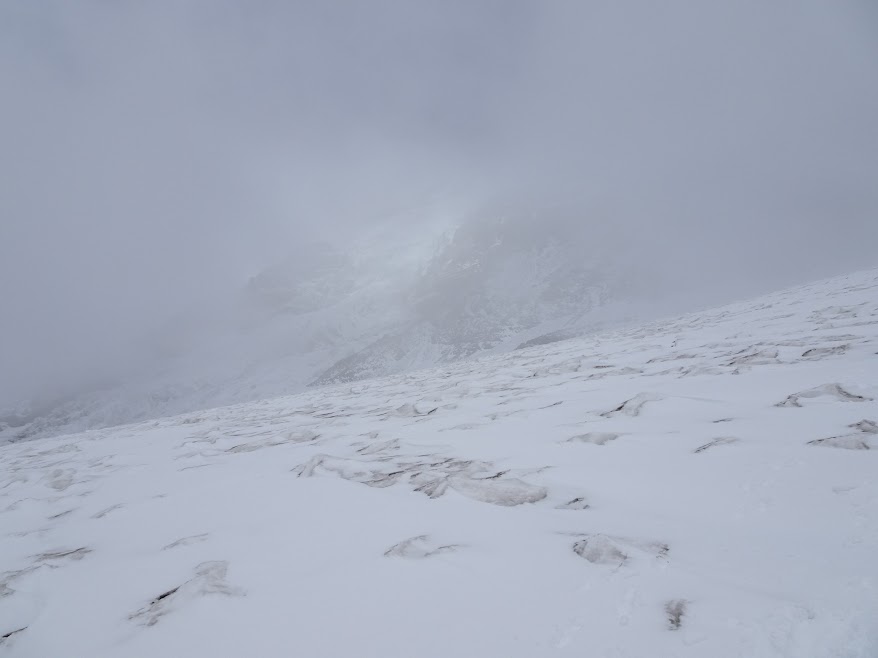 Weather changes quickly up there 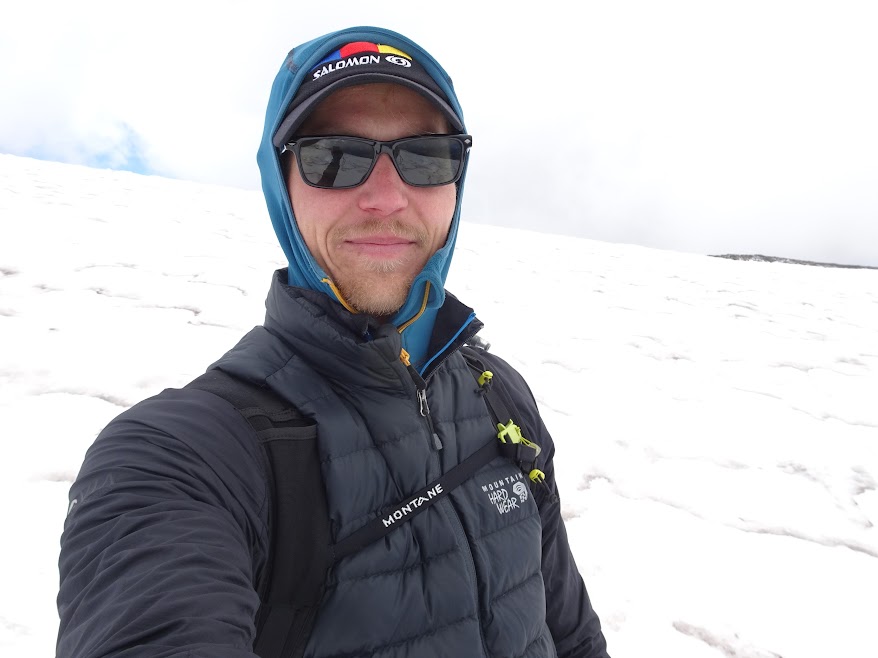 Layered up a bit since it got cold

The downhill made my feet a bit wet and cold. Even tough I love trailrunners the slush even made me fall once when I skied down the snowfield. What a shame. 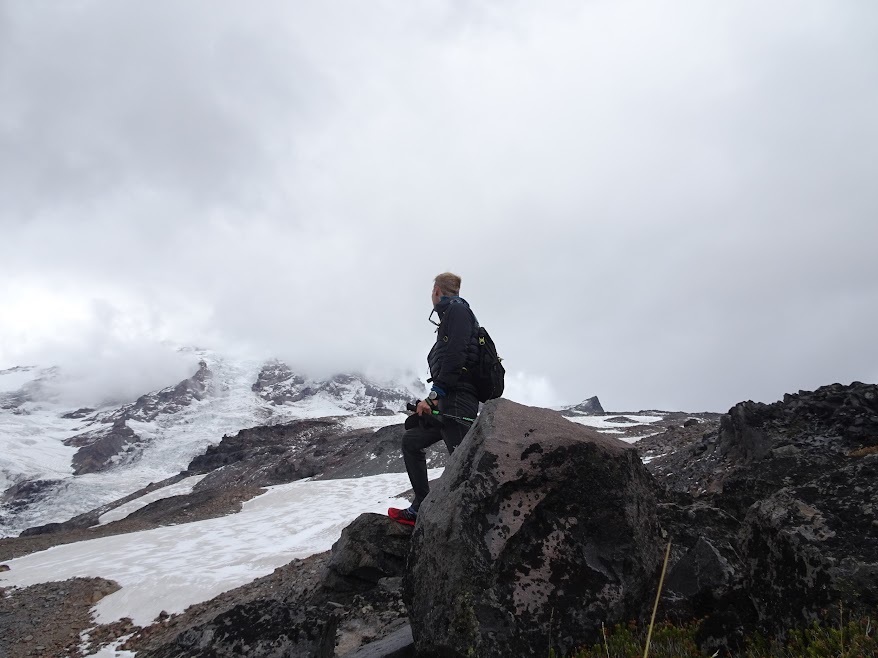 A last glimpse back 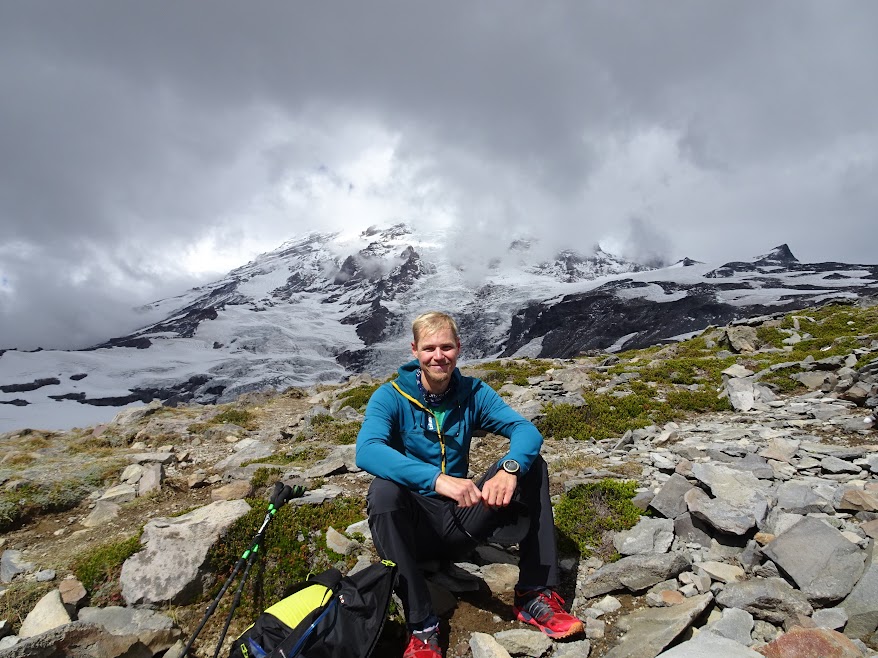 A quick break after reaching the maintained trail system again. 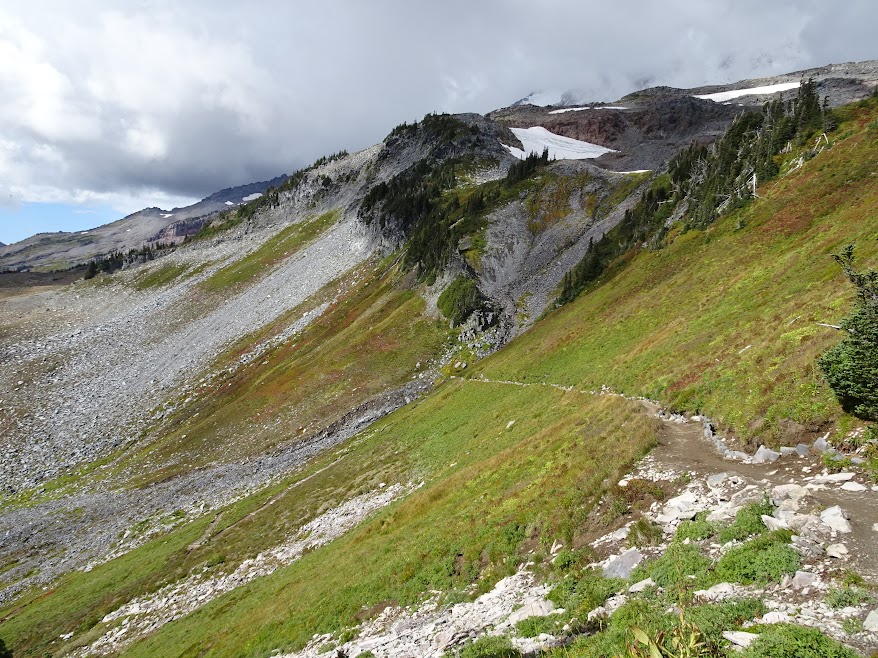 Stroll back to my car

After 5 hours I reached the parking lot. I was full of joy and love for this place even though the maintained trailsystem leading back to my car was crowded with people by that time.

After spending my night at Cougar Rock Campground I hiked to Comet Falls, Van Trump Park and Mildred Point on the next day before I left back to my bunkhouse and daily routine. This hike wasn’t this adventourus but the view from Mildred Point was astonishing and a good way to say goodbye to this Mountain, at least for this year. 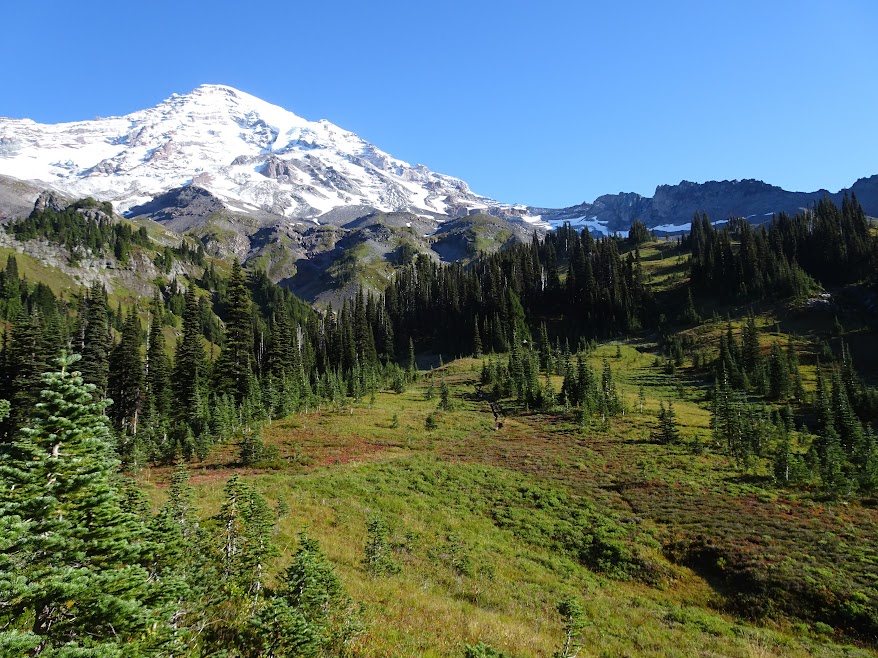 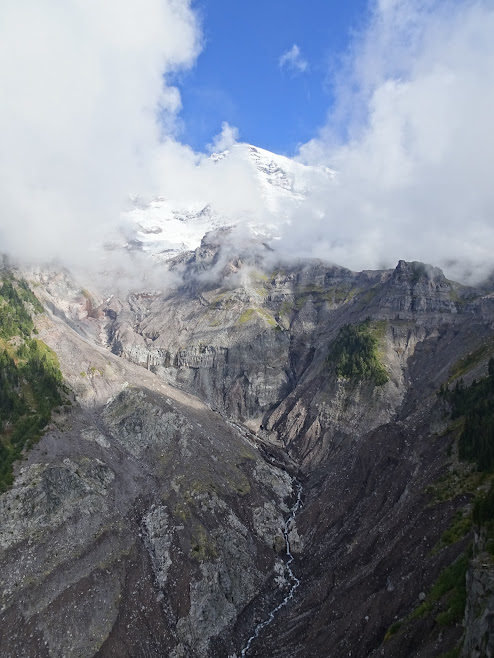 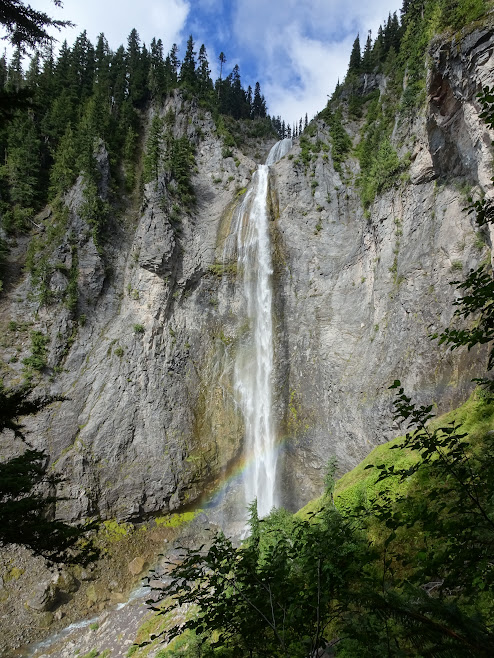